Hi my name is Jonathan and I am 16 years old and this is my story.

I had what the GP thought was a sinus infection from March 2011 and had antibiotics and it cleared. Then it came back in April and I got more antibiotics, and then again in May. The doc thought it was a dust allergy from the building work being done at the school. I got back teeth braces on in June and was told I needed to come back in September to get 4 teeth out and the front brace. Over the summer I was training with my rugby team and my hurling team, so when I started to lose weight it was thought to be due to training.

As the summer passed I felt more tired and that was also put down to over-training. By August I had lost my appetite, and started to lose a lot of weight which they put down to having the back bottom braces, and even at one time it was even thought that I might have a form of an eating disorder. I had been to my GP 12 times since March which was unusual since the last time I had been there I was three. All of the blood tests and stuff had come back normal except I didn't feel right and I didn't look alright, but if you asked me what was wrong I couldn`t tell you... it felt like a permanent cold that made my stomach sick.

I found a lump on my neck on Thursday the 1st of September and went to GP on Friday the 2nd of September. He thought it was glandular and told me to come back the following week. I went back to Greta the dentist on Tuesday the 13th of September. Greta wasn't happy because I couldn't open my mouth wide, and then she saw the lump and she talked to another dentist and rang my GP about blood tests. She asked would I go to Limerick to see a friend of hers - a dental surgeon and that appointment was on the 26th of September. When I was there I had an x-ray, and they told me it might be a cyst so would I come back on the Tuesday for a C T scan. We were called on Thursday the 6th of October and they told me I had two growths in my head - one behind my nose and one on my neck and they were sending me to Dublin to Crumlin hospital on Sunday for more scans, tests and a biopsy. 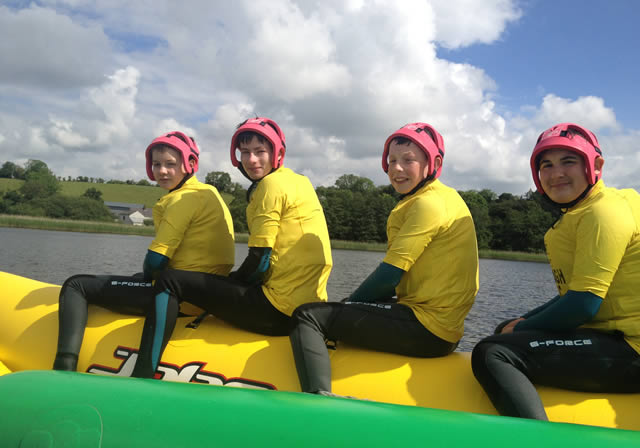 On Friday the 14th they told me I had Nasopharyngeal carcinoma (cancer). I started treatment on the 18th of October and had a one in 5% (of the world population) allergy to 5fu so I ended up losing a stone and a half in 10 days and landed in ICU for a week and two more weeks in hospital. I had three more rounds of full chemo and then 8 weeks radiotherapy with two doses of Cisplatin. I finished my treatment in March and started to recover which took time to build back up the muscle tone I had lost. So from May I started swimming to get my fitness back up. In July I had a routine chest x-ray and it came back clear. A few days later we got a call from Dublin to say it wasn't as clear as they liked - they saw a shimmer so they asked us to go to Limerick at the end of August to get another one done, but they weren't too worried. We went on Monday 2nd of September and we got a call Tuesday saying they saw two tumours and could we be in Dublin for a CT scan on Wednesday. Mam rang Thursday and the CT showed three tumours in the left and two maybe three in the right. I had to wait for a call on Friday to say when we were going to Dublin. We went up on Monday the 9th for biopsy and Hickman line and they confirmed I have secondary nasopharyngeal carcinoma tumours in my lungs. I had to go into treatment again which started on the first of October and I am still on treatment.

The first time I was sick, I felt sick and missed a lot of school in my second year. I was only in school for 65 days, and this year I missed 65 days so other than the couple of friends that stayed in touch through it all, it is hard to adjust back to normal life, when instead of training it is hospitals and bloods and scans Trying to explain why you’re uptight about a scan to someone outside the situation is hard because they tell you chin up and it will be grand and they mean well but they can’t understand that you have already gotten the worse news about a scan so you know what’s possible.

So before all this had started my mam and all of us were fundraising for The Irish Cancer Society for a couple of years and one of the girls in the office suggested that she contact CanTeen. I admit at first even though my experience with the ICS was great I resisted. I really didn't think it was for me. Eventually Mam talked me round, but I made her contact Evelyn and find out the details They told us about the trip in January to Roscommon and the Christmas party was coming up so I decided to go to that first and see what they were like just in case it was a bunch of people sitting in a circle crying about being sick. How very wrong that thought was..... I was nervous going in but the great thing was that you’re allowed to bring someone so I brought my brother Jordan so at least I knew I had him.... but it couldn't have been more different than that!! It was great  - we had a quiz and then we went bowling and played quasar and it was great to be in a place where people weren't afraid of me... of my cancer and didn’t look at me like I was going to keel over... lol.We had a great time and it was great fun.

We then went away to Roscommon in January and had a great time. If I wanted to talk about being sick I could and others were able to talk to me too!! When I talked about reactions to meds and how people react when they find out your sick and we could laugh and hang out. In June we went to Monaghan and it was brilliant! What I like about CanTeen and Evelyn and the volunteers is they don`t tell you - You can’t do things because you have cancer they tell you - You can do it if you want to,  that cancer doesn't have to hold you back !!